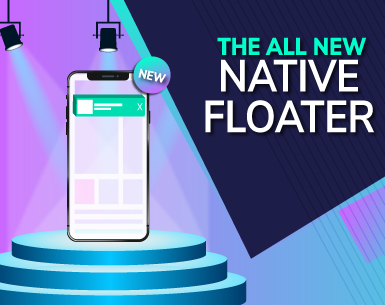 Introducing Native Floater Ads: engaging users while they browse their favorite site through a native-like experience.

We’re excited to introduce a brand new advertising format that is set to become a game-changer for advertisers and publishers. Native Floater Ads (or “in-page push”), fully integrate into the user experience while they browse – creating an effective solution which is easy to implement, giving creative flexibility to run campaigns that bring unprecedented eCPM for publishers and ROI for advertisers.

How does it work?

Native Floater Ads look and feel familiar to users. Visually, they are similar to a push notification or a native ad on a website, they appear directly on the publisher’s site while the user is browsing. This means that there’s no need for opt-in or subscription to display these messages, which work across all platforms and browsers (including iOS). What’s more, the format can be controlled to change the size, content, and screen placement, making it one of our most dynamic and flexible formats. 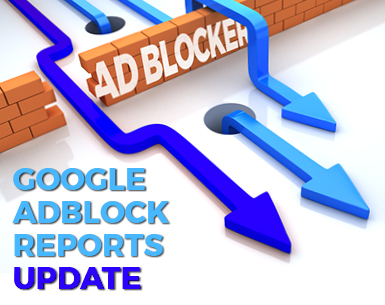 This week Google announced that starting next month they are going to expend their adblocking campaign and block even more ads – https://blog.chromium.org/2018/11/further-protections-from-harmful-ad.html?m=1

As an ad network that’s working with over 10,000 publishers, we have very interesting insights about what’s going on in the industry around the world. Many of our publishers are reporting that in the past year Google approached them about their ads and every publisher received different results as what seems to be a big scale adblock experiment.

We have been collecting these reports and our publishers have agreed to share the methods they are using to confront Google adblock. Today we would like to share their methods with you and we would be happy to assist you in any way to find a strategy that best fits your site:

1. Regulatory Institutions – Several publishers have already approached regulatory institutions such as the FTC in the US and the Competition Commission in the European Union and submitted official complaints against Google adblock. Margrethe Vestager, the European Commissioner for Competition (margrethe-vestager-contact@ec.europa.eu) has promised to follow and examine the issue of Google adblock when it was first introduced however it seems she did not keep up to her word. As a result, many publishers have approached her anonymously fearing Google’s retribution.

2. Anti-trust law firms – Some publishers contacted different anti-trust law firms in order to file lawsuits against Google. Both for abusing their power as a monopoly and for blocking complete sites, mostly in the adult and file-sharing verticals which don’t use Google ads.

3. Compliance – Other publishers are working with Google in order to fix their ads according to Google’s compliance guidelines. These publishers are reporting a decrease in revenue of 30%-70%.

4. Bypass – Many publishers have also reported that they are fighting Google by using different methods that exist in the industry to bypass Google adblock.

5.Payment Processing – Publishers are also switching to a model of payment processing. In order to save and increase the revenue they lost to Google adblock, publishers are trying new ways such as removing their ads and charging $9.90 per user for monthly subscriptions on their sites. Not all publishers can use this method but several of our publishers reported great success with it. In a world where most online content is free, not everyone can accomplish this.

6. Circumvent Chrome – A small number of publishers reported that they stopped operating in the Chrome browser and they give their users the choice between downloading an APK and using their service as an app or using the site in another browser. The problem with this method is that Chrome has a big market share and only a small amount of websites can afford themselves to use this option.

7. Interstitial – There are publishers who decided to embrace Google’s compliance guidelines, replacing Pop-up ads with Interstitial ads which are compliant with Google guidelines.

9. Native – Another complaint ad format many publishers are adopting instead of their non-compliant ads.

10. Playing Catch – We got reports from several publishers who are playing with Google a game of “catch” while they change their ads according to Google requests for a month or two and then return to their non-compliant formats. This method has worked for them very well in the past year, however, it is possible that after the coming change in December it will not work so well anymore.

11. OFF Message – A few publishers have blocked their own sites, presenting a message to users to turn off Google adblock in order to use the site. This method is still problematic since Google “buried” the off button deep in the browser settings.

We here at AdMaven will be happy to assist and consult you on the best strategy for your site. We can also help with implementing some of the above solutions such as Push Notifications, Interstitial ads, adblock bypass and payment processing for subscribers.

AdMaven is at your service! Our team of experts has compiled the top four verticals, which have been showing the top ROI across the board